NASA’s NuSTAR satellite has observed the faintest growing supermassive black holes in our cosmic backyard, and found that some of them are actually luminous “monsters” hiding behind thick clouds of dust and gas.

These growing black holes are faint and weak based upon their X-ray emission at low energies. However, emission in wavebands other than X-rays has suggested that they might be more powerful than previously found. These discrepancies could be explained if the lower energy X-ray emission is heavily absorbed by thick clouds of gas surrounding the black holes. To be able to see through the material requires sensitive X-ray observations at much higher energies. NASA’s NuSTAR satellite, the most sensitive observatory to high-energy X-rays ever constructed, has provided such data, in observations coordinated with NASA’s Chandra and ESA’s XMM-Newton telescopes, which provide lower energy X-ray data. Adlyka Annuar, professor of Astronomy at the National University of Malaysia and principal investigator for this program, indeed found that half of their sample are heavily buried in gas and dust, and NuSTAR revealed them as luminous “monsters”.

“The research raises the important question of how many more monsters have been hidden in plain sight even within the closest galaxies to us?”, said Annuar.

The other half of the growing black holes studied by Annuar and collaborators are just as fascinating as the luminous "monsters". Despite their similar appearances prior to NuSTAR, the structure and physics of the black hole growth in these weak systems is probably entirely different. Past theoretical studies have suggested that these weak systems cannot sustain the obscuring structure seen in the luminous "monsters".

“These new observations from NuSTAR give important validation of theoretical models and reveal some of the weakest growing black holes known”, said David Alexander, professor of Astronomy at Durham University in the UK, one of the co-authors of the paper. 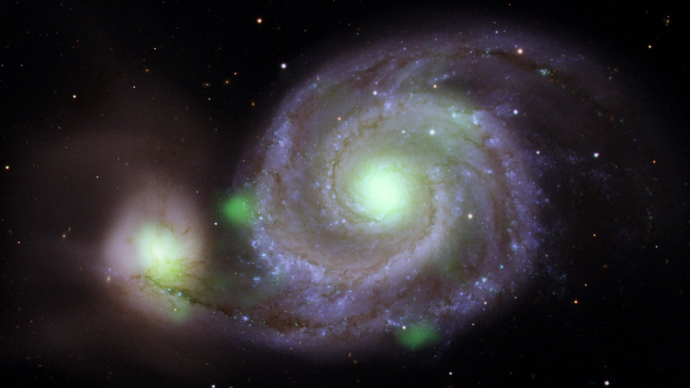 Bright green sources of high-energy X-ray light captured by NASA's NuSTAR mission are overlaid on an optical-light image of the Whirlpool galaxy (the spiral in the center of the image) and its companion galaxy, M51b (the bright greenish-white spot above the Whirlpool). The optical-light image was taken by the Sloan Digital Sky Survey. While the Whirlpool galaxy, also known as M51, is a well studied, heavily obscured, luminous active galaxy in our cosmic backyard, the less-studied companion was one of the four galaxies in the current work. Based on NuSTAR data, Annuar and collaborators were able to show that M51b hosts an intrinsically faint accreting supermassive black hole, amongst the least luminous supermassive black holes known in the local universe. Several of the additional X-ray sources in M51 are likely associated with ultraluminous neutron stars. For more information on those sources, see https://www.nustar.caltech.edu/news/nustar190220

NuSTAR recently celebrated eight years in space, having launched on June 13, 2012. A Small Explorer mission led by Caltech and managed by JPL for NASA's Science Mission Directorate in Washington, NuSTAR was developed in partnership with the Danish Technical University and the Italian Space Agency (ASI). The spacecraft was built by Orbital Sciences Corp. in Dulles, Virginia. NuSTAR's mission operations center is at the University of California, Berkeley, and the official data archive is at NASA's High Energy Astrophysics Science Archive Research Center. ASI provides the mission's ground station and a mirror archive. Caltech manages JPL for NASA. For more information on NuSTAR, visit:
NuSTAR mission @NASA
NuSTAR @CALTECH

This research was led by Adlyka Annuar from the National University of Malaysia (Universiti Kebangsaan Malaysia), funded by the Ministry of Higher Education Malaysia Fundamental Research Grant Scheme, and is published in the Monthly Notices of the Royal Astronomical Society. A prepreint of the article is available here.