A link to the past: connecting local elliptical galaxies and high-redshift starbursts

In order to understand the nature of galaxies in our local Universe, we need to look to their predecessors billions of light years in the past. At these early times galaxies were typically younger and far more active than they are now – forming stars hundreds of times faster than the Milky Way – and often enshrouded in clouds of dust. These extreme sources are incredibly faint in the optical, but telescopes sensitive to far-infrared and submillimetre wavelengths reveal the enormous amounts of light absorbed and re-radiated by this dust.

Astronomers want to know how these galaxies evolve so we can test theoretical models (see also the recent work by Simpson+), and it is therefore important to observe and understand their molecular gas reservoirs. This is the very material which collapses under gravity to form stars, and consequently its abundance controls the evolution of the host galaxy. Although the bulk of this gas, which consists of molecular hydrogen (H2), is invisible in these sources, the carbon monoxide (CO) gas within galaxies is a suitable alternative which is far easier to observe. The CO emission lines are produced from the energy changes during rotational transitions of the molecules and provide valuable information on the amount of gas and its dynamics within the galaxies. 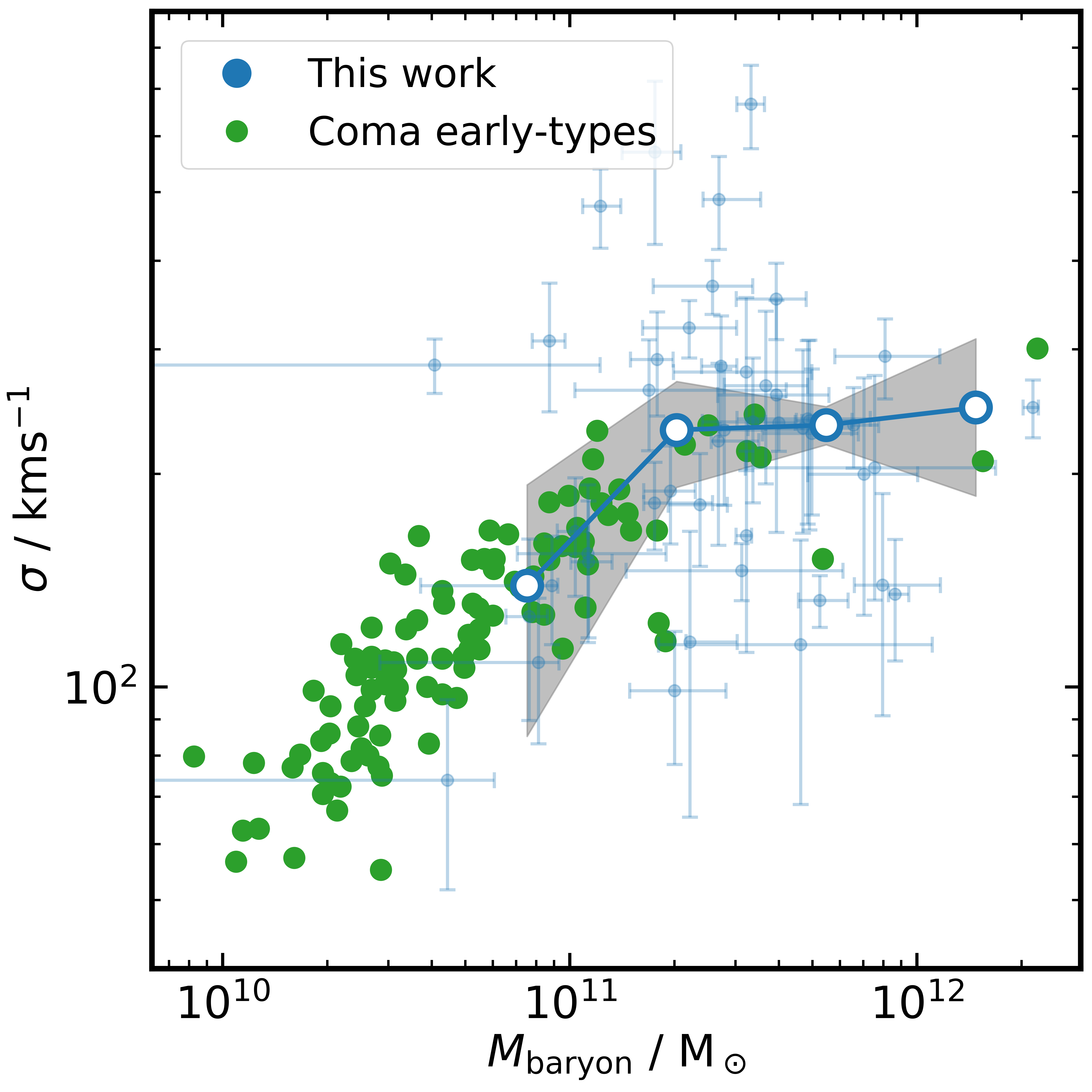 The velocity dispersion of stars within galaxies plotted versus the baryonic mass of each galaxy. The blue points show the distant galaxies studied in the Birkin+ paper, whilst the green points show the equivalent results for galaxies in the Coma cluster in the nearby Universe. Birkin+ argue that the similarities in the overall relation between these two galaxy properties are suggestive of the distant SMGs being representative of the galaxy populations from which the Coma Cluster galaxies likely evolved.

In this new paper, a team of international astronomers led by CEA members have compiled a collection of high quality data from the Atacama Large (sub-)Millimeter Array (ALMA) in Chile and the Northern Extended Millimeter Array (NOEMA) in the French Alps. The data identify the emission from CO gas in 45 high-redshift galaxies. Through these measurements of the CO gas content of the galaxies, the study has shown that the most distant of the targets are more massive, contain a higher proportion of molecular gas and are consuming this fuel for star formation rapidly (on timescales of ~200 million years). Additionally, by comparing their CO emission line profiles with simple simulations, we found evidence that their molecular gas is largely contained within rotating disks.

One of the key results compares the sample of highly star- forming galaxies with galaxies in the Coma cluster – a relatively nearby group of over 1,000 galaxies. Most of these cluster galaxies are old, elliptical in shape and no longer forming new stars, in stark contrast with the young and energetic galaxies being studied in the paper. We show that both populations exhibit similar kinematic behaviour as measured by the galactic velocity dispersion (σ). The velocity dispersion is a measure of the range of velocities of gas or stars within the galaxies. The observations of the CO emission in the distant sample showed evidence for galaxies with more baryonic mass showing higher velocity dispersions up to a mass of ~200 billion solar masses, at which point the relation plateaus (see Figure). Tantalisingly, the same is seen for the more nearby Coma galaxies and such similarities in the internal dynamics of these two strikingly different galaxy populations provides evidence that they are in fact linked by astrophysical processes spanning billions of years.