An international team of researchers led from the Centre for Extragalactic Astronomy Durham University has used the Atacama Large Millimeter Array (ALMA) to identify and investigate a class of extreme galaxies which are invisible to even the deepest observations by NASA/ESA’s Hubble Space Telescope.

These systems are thought to represent highly star-forming galaxies seen at early times in the Universe, forming stars at rates hundreds of times faster than those of our own galaxy. As a consequence of this intense star formation, these galaxies contain huge masses of dust which is formed in the atmospheres of massive stars and supernovae. This dust obscures the light from the galaxies, and along with their great distances from us, this makes them appear red, and hence faint at the optical wavelengths which can be seen by Hubble (as illustrated by the examples shown in the figure).

The team of researchers used a large survey of these strongly star-forming galaxies (termed “submm galaxies” due to their identification at longer microwave wavelengths using ALMA) to isolate a sample of the optically faintest and reddest systems to understand whether the most extreme examples have distinct properties from the less-red examples, and what physically might be driving their observed properties. They concluded that the extreme optical faintness of these galaxies arose from a combination of their larger distances and higher dust obscuration, compared to the less-red examples, and that the latter property was potentially exacerbated by the small sizes measured for the dust content of these galaxies from the ALMA observations. It therefore appears that these very red submm galaxies could represent some of the earliest and most compact massive galaxies which are formed in the Universe, which are completely missed by existing surveys for forming galaxies performed with Hubble Space Telescope. 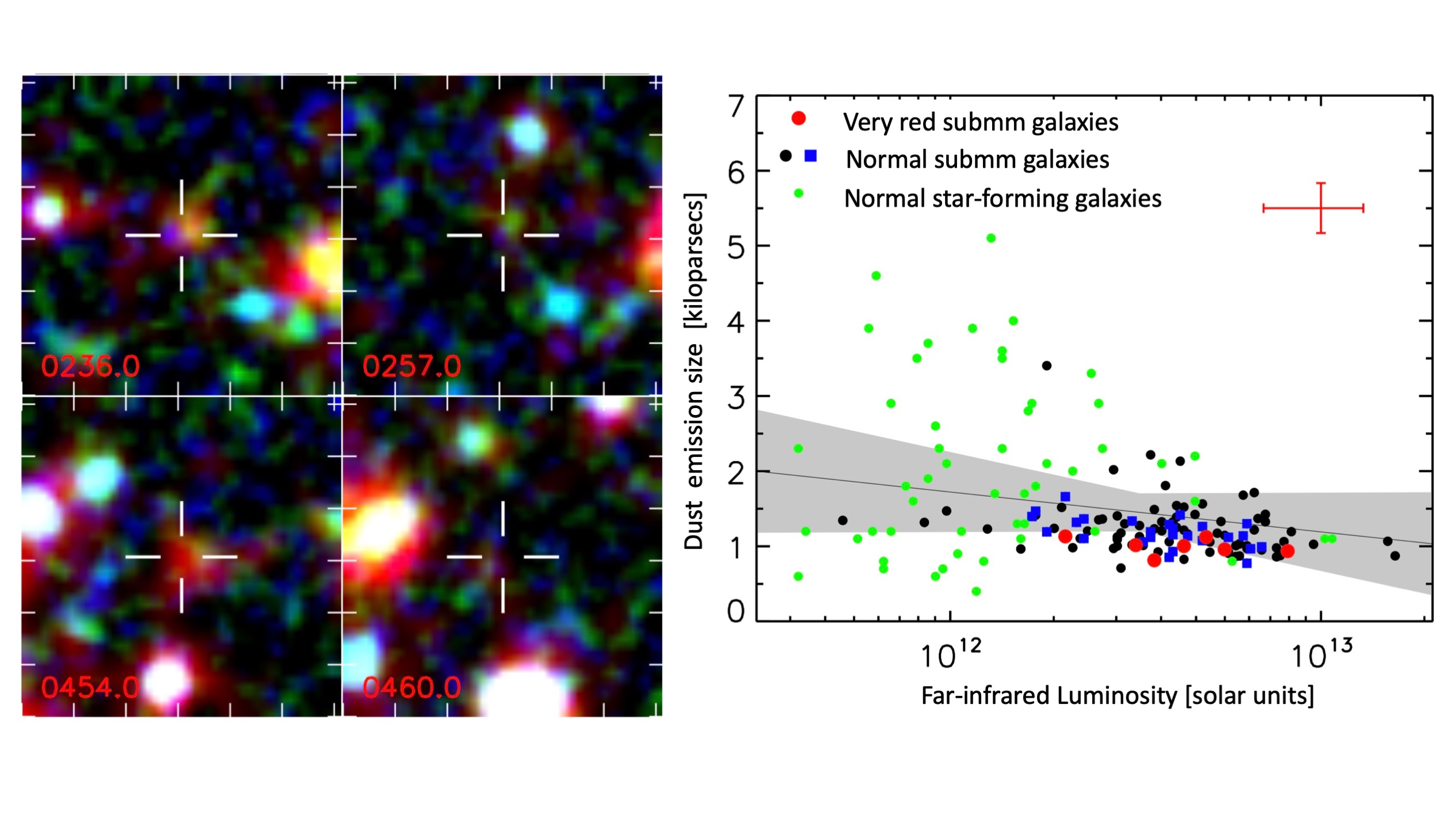 The figure shows near-infrared imaging, including data taken with NASA’s Spitzer Space Telescope, of some examples of this population (identified by the cross-hairs) illustrating how faint and red they appear - even at wavelengths beyond those detectable with Hubble Space Telescope. The right-hand panel in the figure compares the sizes, as measured with ALMA, of these very red, optically-invisible, galaxies to other less extreme galaxy populations. They appear to comprise some of the smallest, luminous galaxies in these studies, which suggests their compact sizes and high dust content may be responsible for their surprisingly red colours (in the same way that scattering by dust in the Earth’s atmosphere makes the Sun appear red at sunset).