The most successful current models of galaxy formation invoke large-scale energetic AGN feeback to explain the observed properties of the massive galaxies. Broadly speaking, this feedback is manifest as AGN-driven, kinematically energetic outflows or ''winds'' or as relativistic ''jets'' that are initially launched from the accretion disk surrounding the black hole. A key feature of this feedback is the injection of significant amounts of kinetic energy into the interstellar medium (ISM) or wider intergroup/intercluster medium (IGM/ICM), which can inhibit and terminate star formation (SF) and gas cooling. Previous observations ahve provided very few direct tests of how this feedback is generated, transported and dissipated in surrounding gas, from the pc-scale of the broad-line region out into the Mpc-scale of galaxy clusters. 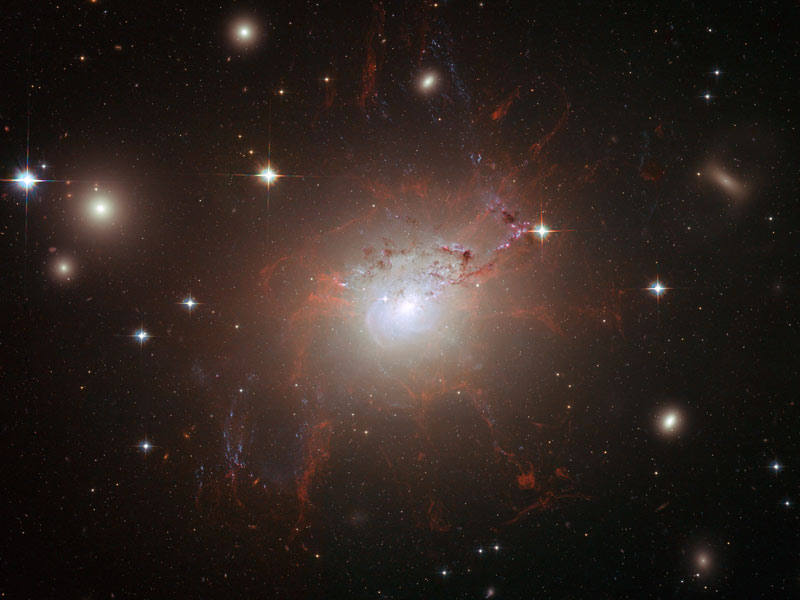 We are working on a series of tests of AGN feedback on scales of the region surrounding the nucleus, galactic winds on kpc scales in moderate redshift galaxies and cold gas in the cores of clusters of galaxies surrounding the brightest cluster galaxy. An example of the latter can be found in this image of NGC1275 which is the brightest cluster galaxy at the centre of the Perseus cluster.

The role of cold molecular and atomic gas is the main focus of this work. Existing Herschel and IRAM 30m spectroscopy allows us to determine the mass and dynamics of this gas. Obtaining higher spatial resolution mapping of the cold molecular gas with ALMA will allow us to track how this gas reaches the central supermassive black hole to feed the observed feedback.

Using the optical and near-infrared surveys that Durham leads (UKIDSS DXS, Vista VIKING and VST ATLAS) and is involved in (PanSTARRS-1, Vista Hemisphere and VST KiDS) we can select clusters out to z=1.4 that have "active" brightest cluster galaxies from radio, MIR and/or UV emission so we can determine the evolution of AGN feedback for the past 9 Gyr.

Staff involved with this project at Durham include Alastair Edge, Dave Alexander and Martin Ward.

A Holistic View of